All the latest news and information, including the events and activities programme. 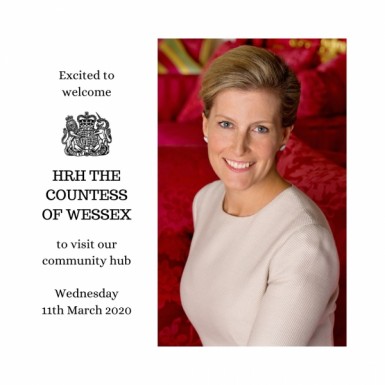 We are excited to welcome special guest Her Royal Highness The Countess of Wessex The Royal Family on Wednesday 11th March 2020 to meet those involved in our community hub.

The Old Fire Station was purchased and transformed into a fantastic multipurpose hub in 2017 with a £3million grant from Jimbo’s Fund (the late Jimi Heselden’s legacy) managed by Leeds Community Foundation. The thriving centre is at the heart of East Leeds, bringing local people and the community, volunteer organisations and charities together.

Her Royal Highness will be meeting the team behind The Old Fire Station along with members of the Heselden family and Leeds Community Foundation. The Countess will also meet representatives from charities and services who reside in the building including: Leeds Cookery School, Elevate - Gipsil, Space2 Leeds, Zest, Healthwatch Leeds, People in Action, SLATE Feel Good Cafe & Safari Cubs Nursery.

The Countess will also meet the family of the late Pam Leighton who passed away suddenly in September 2019. Pam was an integral part of the Leeds Eastern Fire Heritage Group who have worked with Space2 to curate a museum of memorabilia around the history of The Old Fire Station which dates back to 1937.

The Old Fire Station Supported By